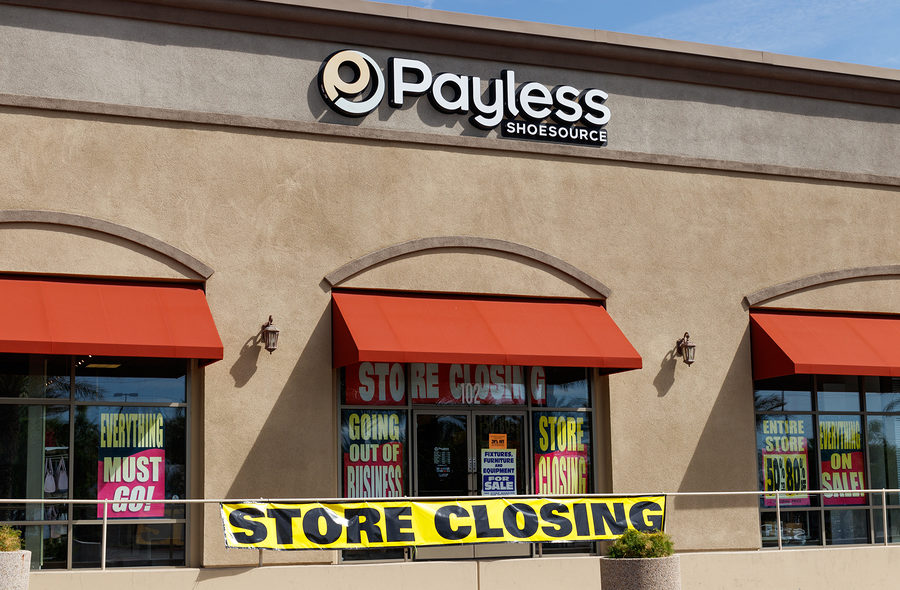 This past year was not a profitable one for a number of U.S. businesses and retailers, resulting in many of them filing for bankruptcy in 2019. These businesses ranged from brick-and-mortar companies to online stores, and by the end of the year, more than 7,000 stores closed nationwide. Some of the well-known ones include:

The luxury department store filed for bankruptcy in August 2019, which came as a surprise to many since the business has been running for a century and has survived many financial ups and downs. However, after filing for bankruptcy this summer, the company was purchased by Authentic Brands Group, a company that also owns Nine West. Authentic Brands will be licensing the Barneys New York product to Sakes Fifth Avenue, and B. Riley Financial has also purchased remaining company assets in November 2019. B. Riley intends to take Barneys’ luxury products and sell them at much lower price points through private sales.

Luxury brands were not the only companies financially struggling in 2019. Bargain shoe retailer, Payless Shoes, filed for Chapter 11 bankruptcy on February 18, 2019. This filing is the second time the company has filed for bankruptcy, the first filing being in 2017.  The company ended up with over $470 million in debt and closed all 2,500 stores it had in the U.S., Canada and Puerto Rico.

These two companies merged in 2006 but soon filed for Chapter 11 bankruptcy in 2011. At the time, the company restructured and discharged a $200 million in debt. However, the company filed for Chapter 11 bankruptcy again in August 2019. The filing allowed the company to separate and sell the two restaurants, as well as a third business, Foxtail Foods. Perkins was purchased by Huddle House in October, while Fairfield Gourmet Food Corp. bought Foxtail in September.

Another mainstay in the country’s malls, Forever 21 filed for bankruptcy in September 2019. They announced that they would be closing most of the stores they had in Europe, Asia, and some in the U.S. It is believed that decline in mall traffic has something to do with why the company’s sales have suffered, as well as the $10 million trademark lawsuit filed by Ariana Grande. The company is now looking forward in restructuring and focusing on the storefronts it still has open.

The popular maternity retail store, Destination Maternity, also filed for bankruptcy in October 2019. The company, along with its two other brands, A Pea in a Pod and Motherhood Maternity, filed for bankruptcy on October 21, 2019. They intend to close 183 of its over 400 stores to offset their financial losses. They attribute the declining birth rate to having a negative impact on their sales.

The retail industry seems to have suffered significantly in 2019, and another U.S. company, Diesel USA, has fallen to hard times. Diesel USA filed for bankruptcy in March 2019, after losing money for six straight years. Their annual sales dropped 53 percent, and they also claim that theft and cyber fraud took $1.2 million from the company over the course of 30 years. The company has a three-year plan in motion that includes keeping their old stores but restructuring to make them cheaper to operate, as well as opening new locations.

Things Remembered has been a popular destination for engraved gifts for years. However, the store is said to be more than $120 million in the red, which led to them filing for bankruptcy in February 2019. Enesco, another giftware company, purchased the business following the bankruptcy filing, and so far, they do intend to continue operating most of their current locations.

Charlotte Russe, a popular clothing store for young women, filed for bankruptcy in early 2019, closing only 94 of its over 500 stores. Shortly after that, however, a bankruptcy court approved the sale of the company in March to SB360 Capital Partners, a liquidation company, who plans to sell approximately $160 million in the company’s inventory before closing all locations.

Children’s clothing retailer, Gymboree Group, filed for bankruptcy in January 2019. The company also owns brands, Crazy 8 and Janie and Jack. After filing for bankruptcy, the company announced that it would close more than 800 stores in the U.S. They were purchased by Children’s Place, another children’s clothing retailer. A relaunch is planned for spring 2020 where Children’s Place will begin selling Gymboree-branded clothing in their stores. Gap purchased Janie and Jack for $35 million.

The popular sushi restaurant, Kona Grill, has also fallen on hard times. The company filed for bankruptcy in April 2019. They struggled to find a company to purchase the business, but one finally made an offer in October 2019. This company is ONE Group Hospitality who agreed to buy Kona Grill and its 24 open locations for $25 million.

Purdue Pharma, run by the Sackler family, is the producer of controlled drug and opioid, OxyContin. Due to the controversy surrounding the drug and the affect it has had on Americans in leading to addiction and loss of life, the company faced a legal action brought by over 2,000 plaintiffs. They filed for bankruptcy as part of a billion-dollar settlement associated with this case.

To view the entire list of retail stores and U.S. businesses that have filed for bankruptcy in 2019, click here.