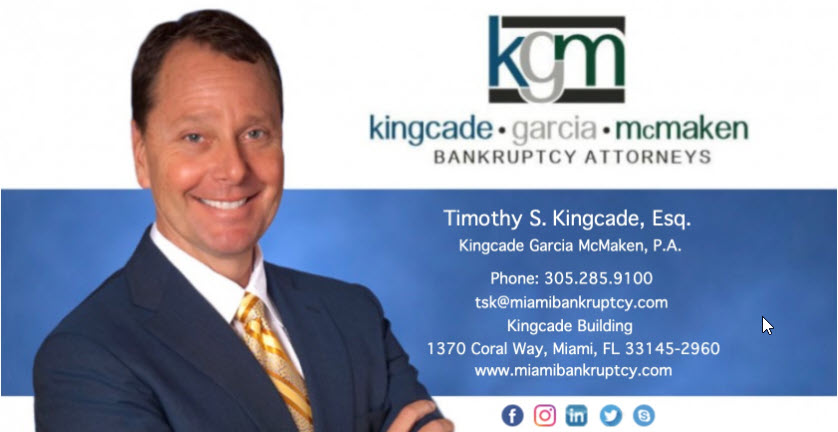 Timothy S. Kingcade founded the law firm of Kingcade & Garcia, P.A., in 1996. Today, he and his firm handle more than one thousand bankruptcy filings each year. As Managing Shareholder of Kingcade & Garcia, P.A., Timothy and his firm represent clients throughout the State of Florida in Chapter 7 bankruptcy, foreclosure defense, personal injury and PIP claims. To compliment Attorney Kingcade’s extensive legal experience, he is also a certified public accountant (CPA), which provides him with a unique understanding of how to handle tax-motivated bankruptcy cases against the IRS.

Outcome: The prior Confirmation Order stripping off MERS mortgage is not entitled to res judicata effect in this case. Debtor’s Objection to MERS’ Proof of Claim is overruled, and MERS’ Objection to Confirmation is sustained.

Outcome: The Court finds, as a matter of law, in a Chapter 13 case, the Debtors are permitted to “strip off” a completely unsecured mortgage encumbering their principal residence.

Description: The Debtors owned homestead real estate worth $48,680.00. The Property was encumbered by three mortgages. The first mortgage had a balance of $60,300. A second mortgage was approximately $20,733.80 and is completely unsecured. The third mortgage has a balance of approximately $21,841.42 and likewise completely unsecured according to the Debtors. Since the value of the Property secures only the first mortgage, the Debtors sought to “strip off” the second and third mortgage.

Outcome: The TBE Property is not exempt under Statute 522(b) (2) (B) of the Bankruptcy Code to the extent of the joint secured debt and the $378.00 joint unsecured Burdines debt.

Background: This matter came before the Court on the Motion by Debtor Juliet Bright to re-open her case and redeem collateral of Tropical Financial Credit Union claimed as exempt. The debtor listed the 2000 Toyota Camry in the original petition with a value of $6,490.00 as of April 14, 2003.

Background: This matter came before the Court on March 26, 2007 on Trustee’s Objection to Claimed Exemption and Motion to Compel Turnover filed by Marcia Dunn, the Chapter 7 Trustee in the case. The Trustee challenges the Debtors’ entitlement to a homestead exemption on a partially detached unit on their property. The Trustee’s objection alleged the residence was a duplex, but at the trial acknowledged that there were actually two separate structures, joined by a roofed patio. Through the years the Ensenats have allowed family members emigrating from Cuba to live in the second building. The Debtors never rented the second building. The second building was occupied at the time by Mrs. Ensenat’s niece, the niece’s young son and the niece’s boyfriend. In the case the Trustee argues that, although the Debtor has not previously rented the separate building, and is not presently renting the separate building, because the building could be rented, the homestead protection should not be afforded to the separate building.

Conclusion: While Mrs. Ensenat’s niece, son and boyfriend may not qualify as the Debtors’ “family” for purposes of the Florida homestead exemption, the Debtors, nonetheless are entitled to claim the homestead exemption for the entire residence, including the second building in which the niece and her family reside, because the structure in which they reside is part of the property that falls within the protections of the constitutional homestead guidelines and is not used for a business purpose.

Background: This matter came before the Court for evidentiary hearing on February 22, 2007, on the Debtor’s Motion to Redeem Collateral and the Response of Ford Motor Credit Company (FMCC). The debtor entered into a retail purchase agreement for a 2005 Ford Focus. FMCC holds a valid lien on the car. The car, in its current state, is not in retail condition and requires extensive repairs and maintenance. Prior to the changes made by BAPCPA (Bankruptcy Abuse Prevention and Consumer Protection Act of 2005), case law in the Eleventh Circuit supported the position that the value was the wholesale value on the date of the hearing.

Conclusion: The Court notes FMCC’s position that the valuation should be the retail value of the same make and model car less the wholesale cost of repairs. This position is based on the fact that Ford can repair cars for much less than retail public. As such, they argue that only this deeply discounted cost of repairs should be taken into account. The Court declines to adopt this approach. The statute clearly makes the price the retail buying public pays standard for the replacement value. This same standard should apply when taking into consideration “age and condition,” which form the data inputs used in determining the ultimate replacement value. Thus, the Court will use the retail repair value for its deduction.

Background: United States Trustee (UST) moved to dismiss debtor’s Chapter 7 case, as presumptively abuse under properly performed “means test” calculation. Specifically, the UST objected the “means test” calculation performed by the debtor, on ground that the debtor had improperly deducted vehicle lease payments on a motor vehicle that she intended to, and actually did, surrender.

Conclusion: The Court finds that the plain meaning of the statute requires debtors to use the expenses in effect as of the petition date, allowing them to deduct average monthly payments for secured debts, despite the fact that they have surrendered or will surrender the collateral securing those debts. Accordingly, the Court will allow, for purpose of the means test calculation, a deduction from CMI for amounts that would have been due, but which the debtor may not pay, to secured creditors on account of property she intends to, and fact does surrender after the petition date. Ordered and adjudged that the UST’s Motion is denied.

Conclusion: A fraudulent transfer claim based on intentional fraud, is illusory. That is, you cannot intentionally defraud your creditors by transferring something in which you have no economic interest. The debtor’s transfer of the Real Property to the Millers’ son resulted in no changes as to the value of the Debtor’s estate. It is for these reasons the summary judgment as to Count II must be granted in favor of the Defendant. Accordingly, it is ordered that the Plaintiffs Motion is denied in full and the Defendant’s Cross Motion is granted in full.